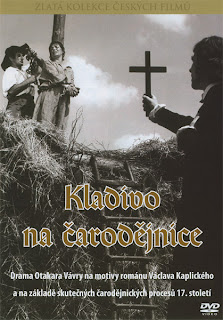 "Whoever believes that any creature can be changed for the better or the worse, or transformed into another kind or likeness, except by the Creator of all things, is worse than a pagan and a heretic."

Coming from a country rich in experimental, absurdist, surrealist-tinged and fantastical cinema, the Czech film Witches’ Hammer is a surprisingly formalist and unambiguous comment on life under a totalitarian regime. Based on actual transcripts of Moravia’s witch-trials during the period 1667-1695, and using the same allegorical language as Arthur Miller’s The Crucible and Aldous Huxley’s The Devils of Loudon, the message is as subtle as a two-foot bodkin to the inner thigh: positioning religion as a state-bound brand of delirium and control. To director Otakar Vávra’s credit, the hysterical and wildly expressionist flourishes Ken Russell brought to his version of The Devils in the following year are toned down to produce a deliberately measured pace and a mounting sense of doom as the veil of fear descends inexorably over a 17th Century town held in the grip of religious paranoia and delusion. Absent too is Russell’s garish palette; Witches’ Hammer’s stunning black-and-white photography compounds its stark opposites with images of an ever-mounting number of smouldering stakes, one for each doomed townsperson suspected of witchcraft, and silhouetted like burnt matches against the grey sky. 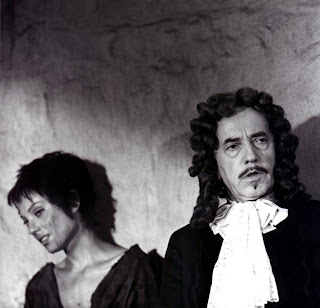 At the film’s core are two bleakly contrasted figures. Representing authority and control is the autocrat Bobling, a famed inquisitor coaxed from retirement to smoke out the town’s pagan elements. A vainglorious hypocrite, he proclaims worldliness a sin in one breath whilst wallowing in the most grotesque of indulgences in the next. His target is the local Deacon Lautner, who is at once a deeply moral man and a self-confessed sinner whom we suspect has carried out a sexual relationship with his young charge, Zuzana. Boblig relentlessly pursues Lautner, usurping his position and privileges along with his material possessions whilst Lautner’s fellow clergy fearfully abandon him in droves. He also sends sends countless innocents through his Inquisitor’s threshing machine. As the litany of forced confessions grows, including that of the doomed Zuzana, Lautner’s various shades of grey are brought back into sharp contrast, and he becomes an almost Christ-like figure made noble through his suffering.

Witches’ Hammer presents a cruel, unforgiving universe painted in blacks and whites: women are perceived as either hags or harlots, men as sinners or saints, while the most profound example of this schizophrenic split is to be found in the film’s title. Characters constantly refer to “the Book” – not The Bible, which is hardly ever mentioned, but the Malleus Maleficarum, the Inquisition’s handbook on the torture and execution of suspected witches, and a manifestation of the Church’s temporal supremacy that is constantly flipped through like the I Ching for inspirational epithets. Ultimately, one has to wonder where God exists within this depressingly human equation. “I’m not a theologian”, one of Boblig’s underlings confesses to Lautner, his blackening teeth barely making a crooked smile, “I’m a jurist”. God, it seems, has left the building. 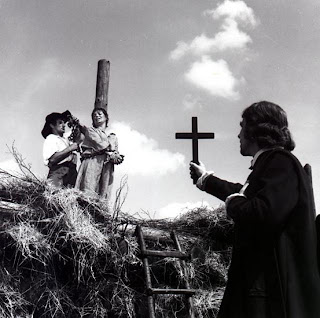 “Power and truth are two different things”, a defeated Lautner tells his accusers, underscoring the struggle between those consolidating their power within the circle and those honest enough to remain on the outside (whom history consigns to being crushed under the dialectical wheels). The film’s binary opposites are found everywhere – truth and lies, dogma and heresy, the spiritual versus the carnal, and in the sometimes arbitrary and paradoxical split between Good and Evil. The underlying dualistic notion that the world and all that is worldly is sinful inevitably has at its core a deep loathing of sexuality and a mistrust of the fallible flesh. This inevitably unhealthy pathology is neatly set up in the film’s opening. Cutting between a wide-eyed monk describing the torments of the damned (“A woman’s womb is the gateway to hell!”) and shots of voluptuous young girls bathing, the naked innocence of the latter is at once tainted by the monk’s foaming-at-the-mouth vitriol.

Witches’ Hammer is by necessity a contradictory beast, both a genre film and a political fable sanctioned by a totalitarian regime. Its generic qualities recall the perfectly-executed excesses of The Witchfinder General (Michael Reeves, 1968) with Boblig a mirror image of Vincent Price’s monstrous Matthew Hopkins, and no more so than in its most disturbing scene of Boblig’s Inquisition poking and prodding a girl’s naked, broken body under the sign of the cross. As for its Iron Curtain origins, it’s too easy to label the film’s premeditated targets as either organised religion (presumably the reason the film was permitted to be made in the first place) or ’s Communist overlords, a critique which most Czech New Wave films appear, at first glance, to be sneaking under the radar. As a philosophical meditation it runs much deeper, presenting the Church as a disorganised and inherently corrupt bureaucracy ossified by constricting dogma. This view is as timeless as it is unambiguous, a metaphor for any worldly apparatus designed to steamroller over the human spirit. A humanist horror film and an indisputable work of art, Witches’ Hammer drives its point home with a cold, methodical rhythm that has weathered the test of time more successfully than many of its modish, pop-centric contemporaries.

Posted by Unknown at 9:24 PM No comments: