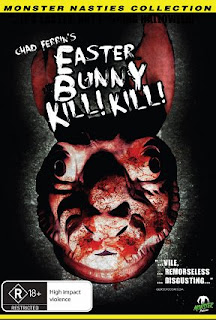 Without doubt one of the most visceral, cinematic and violently, dangerously original talents to metamorphise in the digital underground, Chad Ferrin’s work is finally dragged kicking and screaming above ground in Monster Pictures’ recent releases, the no-budget psycho giallo Easter Bunny Kill! Kill! (2006) and the beyond-psychedelic Someone’s Knocking At The Door (2009).

It’s been a long and arduous road for Minnesota-born Chad, working as a production assistant on Halloween and Hellraiser sequels in the 90s, and mortgaging his home to finance his first feature via Troma Films, the no-taboos-spared minimalist nasty Unspeakable (2000). Despite never having received a single cheque from Uncle Lloyd, he hooked up with Troma regular Trent Haaga for a second film, The Ghouls (2003), a double-edged title referring to cannibal mutants living under downtown Los Angeles, and the drug-fried gonzo “stringers” who film them. Audiences took notice of Ferrin’s assured direction and the bone-raw performance from lead stringer Timothy Muskatell, also in Unspeakable as both scat-obsessed therapist and mohawked, de Niro-like pimp. Once the dust settled, however, Ferrin, Muskatell and producer/actor Haaga found themselves stranded once again in the no-budget ghetto with a slasher script and only five grand to translate it to the screen. 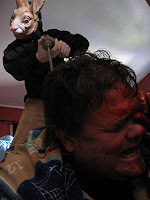 You know what they say about Necessity being the toothless, ragged mother of Invention. With Easter Bunny…, Ferrin and co pulled a rabbit out of the hat: a bizarre, maddening, unpredictable, perverse rabbit-masked riff on the “holiday stalker” sub-genre. The ever-valiant Muskatell snorts cocaine off hookers’ tits, charms his way into a single mom’s home for the weekend, then grants his crippled pedophile sidekick unlimited access to her palsied sixteen year old son. And that’s just the wallpaper. This ain’t no sad, self-reflexive, pre-branded, by-the-numbers exercise in an overtrodden genre pandering to the “so bad it’s good” brigade. Instead you’re served a film that’s so far out on its own, at turns grimly humorous and plain grim, and always with a savage cinematic eye and an intuitive grasp of what makes an audience of true believers howl for more.

Drenched in blood, buggery and drug-induced psychosis, Ferrin’s follow-up feature Someone’s Knocking At The Door chronicles five college kids experimenting with a reality-altering substance locked away since the Seventies, when its guinea pigs and serial killer sweethearts John and Wilma Hopper went on a fucking-and-killing-and-fucking spree. Trippy visuals and cruelly unnerving sound design maintain the film’s “what is real?” scenario right to the bitter end, and a bona fide budget signals yet another exponential leap in filmmaking from a mutant talent that’s only begun to grow bigger and scarier. 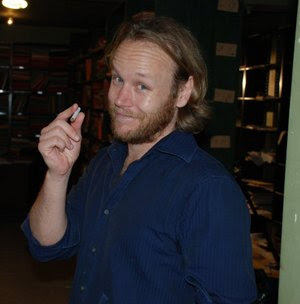