Has Downloading Killed The Video Star? (2012) 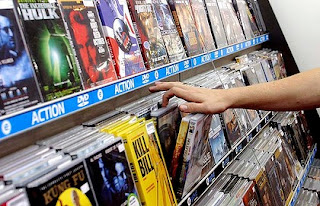 Has Downloading Killed The Video Star?

I'm cast in this Brisbane Times article as the Video Prophet of Doom. Not surprisingly, my more grim and bitter comments about the death of video stores and how we blindly and blandly consume culture have been trimmed, but you get the idea...

The local video store: No matter how you cut it, the long-term future for movie rental outlets looks grim.

It's a ritual as old as VHS.

On an uneventful night, you head down to the local video store, rummage through the shelves for a movie to rent or beckon the clerk for a worthy recommendation.

But, like a fading video tape, this concept looks like it is being gradually lost to history.
Advertisement: Story continues below

The small corner video stores in Queensland are closing, the specialty rental vendors are long gone and the larger stores are needing to diversify to stay afloat.

No matter how you cut it, the long-term future for rental stores looks grim.

He has been active in putting in place strategies to keep many Blockbuster and Video Ezy franchises in place as well as rolling out hundreds of strategically placed rental kiosks throughout the country.

Mr Uniacke said he hoped Franchise Group's army of 120 Video Ezy- and Blockbuster-branded kiosks (carrying new release DVDs no more than 100 days old) would swell to 3000 Australia-wide within the next few years, complimenting a fleet of 300 stores (200 fewer than today).

But his main concern was to make sure the stores that remain diversify to stay relevant, whether that be by selling DVDs, collectables or fast food (Cold Rock ice creameries have been added inside at least six stores throughout the country).

"You have 350 square metres and if you can bring other offerings into that store that gives you a chance at longevity," Mr Uniacke said.

"If [owners don't diversify] they will die. If you just want to just maintain a bricks and mortar rental store and you think that's where your future is, good luck."

According to Network Video managing director Keran Wicks, wage increases and "exponential rent" had added to the bottom line costs for video stores.

Mr Uniacke said financial pressures were forcing mum and dad owners out of the business nationwide.

He said Franchise Group was in the process of rationalisation, with franchisees buying out outside competitors as well as smaller operators within the group itself.

In Queensland the rate of stores closing is disproportionately worse; a phenomenon Mr Uniacke blamed on our most recent natural disaster.

"I've had franchisees who have said to me 'before the flood we were doing $17,000 to $20,000 a week – post the floods we're doing $10,000. No one's spending, the people aren't coming out, the insurance companies aren't paying where they should, my franchise agreement is up, my lease is up, I just don't know if I can risk another three to five years'," he said.

"In the time I've been in this industry, the stores in Brisbane region for bricks and mortar home rentals have been some of strongest in Australia. But we're seeing some unprecedented action coming out of that area that is actually very sad.

According to Mr Uniacke, small stores that exclusively offered rentals were no longer viable, which came as no surprise to Andrew Leavold

Having seen the writing on the wall two years ago, Mr Leavold closed his cult film rental outlet Trash Video in West End.

Mr Leavold said he was just as saddened by the fading prominence of the video rental ritual, which he said used to be a fun and adventurous part of our culture.

"The actual hunt for something that would be considered special has gone now that we have at least the illusion of unlimited access to material," he said.

"We also have the situation where there is so much choice now that it is a bit bamboozling for people and they start having to curl up into a foetal position and prepare a comfort zone around them so they only come in contact with the most familiar things – those films that they've seen before or films their colleagues are talking about around the water cooler or those films that are constantly being bombarded at us from the Murdoch media," he said.

"Retail has changed so much but also the nature of how we consume films and how we regard the consumption of films is something we can just download, dump, watch and forget.

"Film really doesn't have much of a value other than for those collectors out there who feel that they must own them."

With the experience of renting being reduced to a purely consumerist endeavour, Mr Leavold had no problem pointing out the reason for the greater paradigm shift away from renting.

"Downloading. It's as simple as that," he said.

"There is no reason for anyone to rent any more if they can just steal. Now the onus is more on ownership rather than renting.

"Retailers like JB Hi-Fi can supply the budget end of things and then the specialist end can be taken care of by stores such as Amazon or smaller niche.

"So really there is no room for anyone to do a shop front any more unless they want to take on bulk wholesalers like JB Hi-Fi, who can do it bigger and cheaper than anyone else."

Mr Uniacke did not see piracy as a bigger threat than the rise in rental costs or wage issues.

To him, illegal downloading was "just another competitor", one that provided a product of inferior quality that had not been any more severe in recent years.

"[Piracy] is no more of an issue today than it was two years ago," he said.

"There has not been some change in peoples' habits overnight where they've become better at stealing that IP, it's not like 'because the NBN is here we can steal it quicker', we're not seeing any of that.

"That's not why we're rationalising, absolutely not."

Mr Uniacke said illegal downloads were not making any greater impact either.

In April, YouTube launched its movie rental service in Australia offering streaming films for as low as $3.99 through the website and Google Play.

Mr Uniacke said it was too early to gauge how the service had been received in Australia, but going by trends in the United States, the transition hasn't been dramatic.

Streaming accounts for less than 5 per cent of the rental industry in the US.

"That doesn't mean I think in 2050 that there will be heaps of video stores left," Mr Uniacke said.

"Download is where it will go in the future. But we will also have the brands that can take us into that download space in time as well."

Posted by Unknown at 4:13 PM No comments: