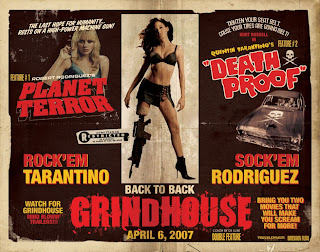 What is a "Grindhouse" exactly? It's the ghetto version of the drive-in, a rundown inner-city roach motel showing third-run chop sockeys and Italian cannibal films, the kind of place you might get an anonymous blowjob or a switchblade in the eye during a double bill of 2069 A Sex Odyssey and Wham Bam Thank You Spaceman. If you peer closely through the accumulated nicotine grease and tumbleweeds of discarded tissues, you might even recognize the same place your parents took you to the premiere of Chitty Chitty Bang Bang ten years earlier. Steer clear of the uncovered beer and just stick to the popcorn – lord knows, it will stick to you.

Most of us from the Video Generation missed out on the Grindhouse experience, a dubious pleasure firmly rooted (ahem) in the libidinous Seventies which disappeared around the same time as Betamax. Not so the teenaged B-culture vulture Quentin Tarantino, who claims to have spent most of the early Eighties in similar shit-pits devouring the collected works of Lucio Fulci and Cirio Santiago. We're talking the lowest of the low-rent genres: Nazi sexploitation (Ilsa She Wolf Of The SS), amputee revenge epics (Crippled Masters, The Amazing Mr No Legs), The Sinful Dwarf, Avenging Disco Godfather. No taboo, no limit of bad taste, no exploitative hook was left unexplored. God bless the Sick, Sick Seventies. 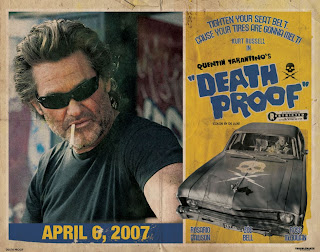 Not content with reinventing the modern noir thriller, Tarantino continues Kill Bill's concerted program of genre appropriation (post-modern terminology for outright thievery) by crafting his ultimate tribute to the Seventies B-grade double bill. Now restored to its original format after its collapse at the box office and subsequent poor faring as stand-alone features, Grindhouse pairs Planet Terror and Death Proof, along with a selection of faked trailers (Werewolf Women Of The SS to name just one) proudly under its deliberately rain-stained banner.

For all its numerous faults, Grindhouse is still a grandiose one-fingered gesture to the homogeny of mall-bound irritainment. At worst it's grotesquely self-indulgent and oversteps the staying power and genre savvy of its usually forgiving audience. To his credit, Tarantino's partner-in-crime Robert Rodriguez hits every mark in Planet Terror, a rapid machine-gun edit of a hundred apocalyptic undead shockers with some wildly imaginative flourishes. Tarantino's Death Proof, on the other hand, doesn't work as an exploitation OR Tarantino flick, and for all its annoying references to Vanishing Point and Dirty Mary Crazy Larry, he's forgotten the rules of what makes a great B film. Instead it's a two-act movie that gets bog-heavy in dialogue while looking for its third act. 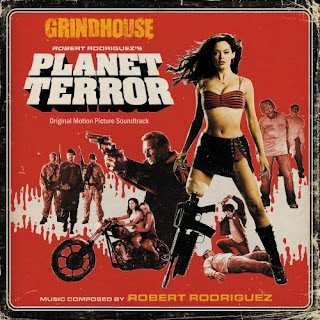 The core problem with Grindhouse is simple. You can't make Outsider Art on an Apple Mac, and you certainly can't give two rich kids $50 million and expect them to conjure up the magic of a film made on one hundredth the budget. If I was Harvey Weinstein - just give me a few hundred more cheeseburgers and I'm almost there - I'd hand them half a million each and a few thousand feet of mouldering 35mm stock, send Tarantino to the Philippines and Rodriguez back to Mexico, and let them get down and dirty in their self-dug trenches. THEN, and only then, will my respect for them as filmmakers return in full.

Grindhouse cinema is, by its very definition, cheap and nasty. The latter you can fake; cheapness is something that exists in a film's very soul, and no amount of post-production effects can reproduce it. More significantly, no media hype nor gratuitous name dropping can make such a disreputable, grubby and inherently unacceptable genre "cool". To evoke the name Grindhouse is like pouring boiling oil on a rat's nest: you may not like the look and smell of what comes bubbling back out.

YoBit lets you to claim FREE COINS from over 100 distinct crypto-currencies, you complete a captcha once and claim as much as coins you want from the available offers.

After you make about 20-30 claims, you complete the captcha and keep claiming.

You can click CLAIM as many times as 50 times per one captcha.

The coins will held in your account, and you can exchange them to Bitcoins or USD.