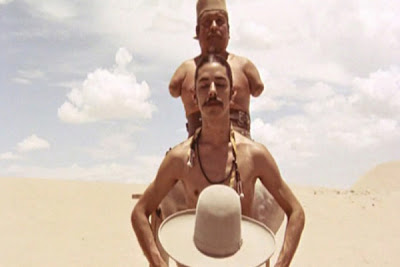 A shits into a glass bowl and it turns into gold. A cowboy rides past a river of blood from a hundred murdered brides. An armless dwarf, a legless midget, a and a skinned goat Crucifixion.

Profane, disturbing, infuriating, inspired: the world of Chilean-born mystic artist and filmmaker Alejandro Jodorowsky (or, in his words, the “Jodo Multi-Universe”) is a multi-tiered journey into the furthest reaches of human experience, be it real, hyper-real or otherwise. His two most characteristically perverse works have been mostly out of circulation since their releases; now El Topo (1970) and The Holy Mountain (1973), films as enigmatic as their Creator, are restored to the Dendy George Street screen courtesy of IMA in pristine, restruck 35mm prints.

Via email from , his home since his “Mexican phase”, Jodorowsky speculates on the filmmaker as shaman, film as alchemic trigger, and his role as Creator of an incredible new Multi-Universe.

Andrew: When I saw El Topo and aged 20, I was affected the most by the potent images and baffled by the non-linear narrative. Now at 38 I’m looking for symbols and ideas behind those symbols; in twenty years time I will no doubt see something else. Is this not what art is meant to be – ambiguous, timeless, multi-layered, designed to provoke and infuriate as well as inspire?

Alejandro: Yes. I always tried to create images with many interpretation levels. Every spectator in front of one of my image can have a different reaction. Laugh, cry, get mad, love and hate. But the unique thing I am looking for as a unique reaction of the audience is when they look at the picture, even if they doesn’t understand it completely, they will never forget it. 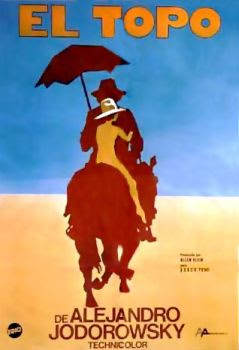 I haven’t seen the remastered version of , but the new print of El Topo looks absolutely stunning – the colours! The clarity! Just how much time and effort went into perfecting the new prints of Fando And Lis, El Topo and The Holy Mountain?

I remasterized the three pictures in only one week in . I could do that because I had an amazing technical crew. Allen Klein invested in this remasterization 500 000 dollars. May he be blessed.

You were quoted in the Sixties as saying “We are not; we are becoming”. This is alchemical, is it not? How would you describe this philosophy to those who have never heard of alchemy or other esoteric systems? And how can films - like psychedelics, like meditation - trigger the alchemical idea of transmutation?

I find this interesting: souls are eternal and interdimensional, and yet are trapped in these eating, shitting, fornicating, procreating and ultimately decaying and dying three-dimensional biological machines. Some people crave the mystical experience and yet react strongly to or reject depictions of such primal things as blood, conflict, sexuality, death, putrefecation and even bodily imperfection. Why do you think there is such an unbroachable divide between the spiritual and the carnal for many?

For more than 2000 years religion has divided our being in body and soul as if they were separated. It is the matter of the universe that is producing conscience. We are the song of the stone. Christ, the Virgin Mary and the 12 apostles same as Buddha and Mahomet have produced each in his life no less than six tons of shit.

Jung’s influence on both your art and your work in psychoanalysis is strong, but there are also echoes of Wilhelm Reich – which of his theories appealed to you and why?

I like in Reich his theory of “Orgon”. A sexual energy, which fulls the atmosphere. Which is in fact only the “Prana” of Hindu mysticism. The healing virtue of the orgasm is a genius idea.

Fando And Lis and El Topo both appear to be heavily influenced from your work with Teatro Panico. Theatre and cinema are not dissimilar but are still two different languages – how did you go about translating your stage experience into films?

I don’t translate experience. I inspired myself of schizophrenic people. I can be a lot of characters. The theatrical director is not the movie maker, not the poet, not the mime, not the therapist, etc… I believe that every man can be multiple, like for example Leornado da Vinci or Jean Cocteau.

If you want to know this, read my two comic books : The Incal and The Metabarons.

Like Bunuel, your Mexican films resemble no other films made in . You both have an outsider’s perspective on its unique landscape and iconography. As someone born outside of Mexican culture, what were you able to draw from this unique experience?

Each bottle of wine has a different taste according to where the grapes are grown. The is different from but none of them are superior to one another.

In the second part of , in which you are introduced as a Master, the intricate overhead shots - showing the table in the centre of the eye, and the tiny figures walking around huge symbols - are incredible. I understand you were working with a substantially bigger budget than El Topo, but I can only imagine how much preparation and execution went into the entire movie! Just how complicated did the shoot become, and how satisfied were you with the results?

In reality, at this time I demanded to the movie to be as profound as a sacred text, an evangel or a sutra. I wanted a cinema able to change the human being, illuminating him. I didn’t used actors. In this movie a millionaire is a millionaire, a whore is a whore, a nazi is a nazi, a degenerate is a degenerate, a shaman is a real shaman. I filmed 35 hours in incredible circumstances where we risked our lives. For example we all jumped in the middle of the where there are sharks. Why we did this? For me the ocean was the symbol of the mystery. I wanted us to get free of the rational prison to fully enter in the deep dark waters of the unconscious. We all almost drown. The technical crew instead of filming us saved us. The two hours duration of the are only a trace of an essential mystical and missed experience. I wanted to illuminate the people I filmed. Instead of making holy monks I made amateur actors ready to prostitute themselves in the industry. 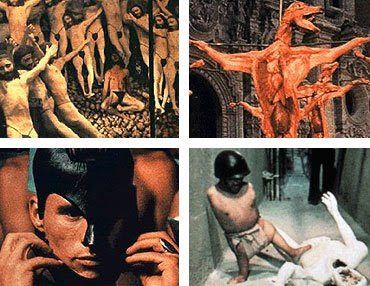 In the Tarot, I’ve always been interested in the Hanged Man, a card which I believe is a signal of potential transformation. This theme is throughout El Topo and , as is (I suspect) a great deal of Tarot-inspired imagery. What is your interpretation of the Hanged Man?

The Hanged Man cut himself from the world to find his real inner self.

I have spent a great deal of time working in the , filming a documentary about their famous midget James Bond called Weng Weng. In their culture, dwarves and midgets are revered as special and almost holy, as if blessed by God, and not cursed or feared. What is your instinctual belief, and the source of your fascination with using their images?

I love all that is not mediocre and reveals imagination. The monsters are for me forms of biological art. They are a special form of beauty. Hyeronymus Bosch understood that, Bruegel, Goya, Velasquez, Picasso, all the surrealists, and in cinema Todd Browning, Buñuel, Fellini, Guillermo del Toro and many others. When I was a kid, 8 years old, my favorite hero was the Frankenstein monster.

What are your feelings these days about your lesser-known films Tusk and The Rainbow Thief?

I don’t like them. When I shot these two pictures, I was in misery, and needed to feed my family. I was obliged to make concessions.

Now it is not Jodo universe, but Jodo multiuniverse.