Andrew: I understand you're shooting a sequel at the moment?

Tom: I'm actually now in London to shoot the sequel, in the middle of the shooting.

What can you tell me about the next "sequence"?

It's going to be a Human Centipede of twelve people, and the tagline will be "100% Medically INaccurate"! I had so many ideas when I wrote Part One, I thought I'd first want the audience to get used to this sick idea, and now that people are, I can go full force now in Part Two - anything I didn't show in Part One, I'll show in Part Two! (laughs)

Apart from the twelve-part centipede, is there anything else you can reveal this early?

It's a very original thing, I think people won't expect what will happen, and I can't tell yet what happens to the middle girl or if Dieter [Laser] is coming back.

Speaking of the creative process, when you're writing the film, what or who sparks your inspiration? Where do you get your juice from? 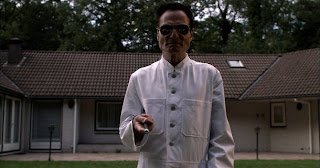 For Part One, it was really [from] stories I read about the Second World War and all the notorious Nazi doctors. When I wrote the script I kept thinking about those surgeons, because they were so crazy. So for me the most dark and scary things that could happen to human beings - intelligent surgeons cutting you open - they are really disturbing people. So that was really the basic idea for the Dr Heiter character. Each time, when I write a script, I have something in mind with what's lingering in the back of my head.

The Dr Heiter character in First Sequence doesn't reveal his motivations other than one line: "I don't like human beings."

I did it on purpose. Most of the time the less you know about a villain the more scary he is. Like the guy in No Country For Old Men. The guy with the strange haircut, you know nothing about the character, that makes him so crazy and so creepy.

Working on the character of Dr Heiter, you obviously had an image in mind, but Dieter really brings the character to life. How much of the creation is Dieter's?

When I wrote down the entire character, Dieter is a very methodical actor, so he said, "I will bring my own wardrobe." So he got that beautiful white coat, he brought it from an old Nazi store in Germany, he brought the suits, a bathrobe and stuff. When he was on set he didn't want to talk to the crew or cast, he would just sit in his room alone, and he had a special Dr Heiter diet, all this strange green stuff that he ate. And he was in character all the time. So you can imagine, pretty crazy. Off set he's the sweetest man in the world. But on set is was pretty scary as well. So fifty percent of the character he brought in.

The other character I really liked was the house. You do become very familiar with each room and each exit or entrance…

It was quite a search, that house, because I wanted to shoot it all in one location to get the claustrophobia. So we had to look for a house that had a swimming pool, had the basement, and there wasn't a forest, so that took a lot of time to find it. Luckily this house was for sale so we could rent it for a period. It was in a villa area, which was very funny, so there other houses around it. So with some tricks we had to get all the other houses out of the shots so it looked like it was really in a forest. Neighbouring houses, people were hanging out of their windows watching what we were doing there! 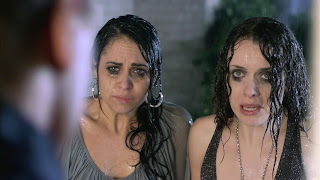 The internationalist approach to the production, with a Japanese actor, German actors etc - I can only imagine the money is coming from various countries?

No, that wasn't even the thing. I used American girls because I saw so many horror films from the Eighties, where you see those naïve American girls getting into trouble, so I knew it had to be these stereotyped American girls in the film. And I wanted the head of the Human Centipede not to be able to communicate with the doctor, so it had to be a language that was very far, far away from anything understandable, and I love Japanese horror films, so I said that must be a Japanese character sitting there. So that's how I had connection with those three countries. 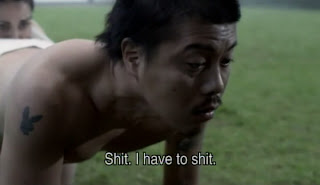 I wondered to what degree the Japanese character was included for economic reasons or for narrative reasons.

Purely narrative reasons. It had to be a love for Japanese horror films and those characters, they're strong and powerful, beautiful faces usually, the actresses. You want that contrast between Dr Heiter and this strong Japanese face. And the fact that he can only yell in Japanese, I love that. He's speechless, just like the girls who are attached to his ass! They're almost in the same position.

Then of course he gets to perform the ultimate act of self-immolation at the end of the film!

Yes. And it's something Japanese people do, hari kiri, and the special phrases, like Akihiro [Kitamura] did in the film, it's very cool.

Dr Heiter himself becomes like a centipede, so you get that excruciating chase at ultra-slow speed up the flight of stairs! It's a film that's being talked about, and it's hard to find a film that shocks these days. Why do you think people are talking about The Human Centipede?

It is such a graphic hook, that's true - in exploitation filmmaking you need that hook to see your film rather than someone else's.

Absolutely. And so many films that are made are copies from other films, and it's very hard for us to come up with something original. But that's the trick I think for every filmmaker who starts, to create something really original. 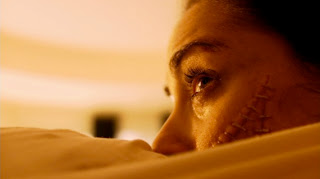 Of course, the ability to reduce the hook down to just three words - ass-to-mouth - automatically you get a mental image that's impossible to shake! The most perceptive review I've found, in my opinion, said the characters seem to exist in a limbo between living and dead, where death would be the most preferable option. I haven't seen a scenario as bleak as this since Salo.

That's true, that's one of my biggest influences. A lot of horror films have a fear of death, but in this film they're better off dead, I think. The idea of suffering for so long in this position in this claustrophobic house with this crazy doctor who could do everything to you, it's the ultimate nightmare, because you can't escape as well.

And if your only means of salvation dies, hope dies with them…

What's been the most interesting reaction to the film you've heard so far? 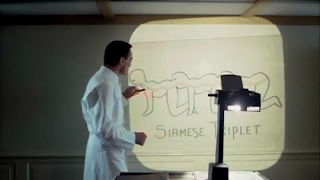 In Holland at the test screening, a couple of girls left the theatre and they were afraid to talk or even look at me! They thought I was such a disturbing man. I said it's all make-believe, the psycho killer. But the reaction is so strong. And on Facebook, the fan page they made of me, people want to sterilize me, shoot me, send terrorists after me - some people are so incredibly angry at the film.

And they can't separate the art from the artist?

When you started writing the first Human Centipede, did you ever imagine a franchise?

I was not really thinking about a franchise. When I was writing the script I had so many ideas, I thought at first keep the basics, and eventually wanted to make another film about it, to use all the other ideas. And I have even thoughts about the third one, because three films would make kind of a centipede itself (laughs). I'll do that in a couple of years. But I never want to make like Saw 8. I only want to make something if it's original and not copy the same thing I did before. 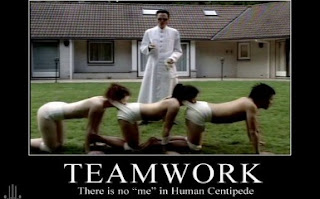 If you weren't going to make the third film in the sequence, what would you imagine as your follow-up?

I'm already working on a script, I want to shoot a film in LA, and again I think I have a very original idea for a horror film, a psychological drama. It's going to be very controversial and I think a lot of people will talk about it. I can't say what it's about yet, but it has nothing to do with centipedes (laughs). But that's really my thing, I love to shock people or be controversial. For me that's where all the fun is.

What other genres could you do that in, a musical?

Yeah! I made two black comedies in Holland, and a children's film, but my main core is really with these kinds of films.