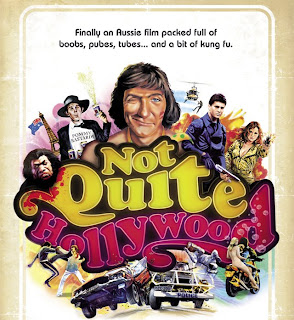 OZPLOITATION! Knockers, Shockers and the Coming (and Coming Again) of the R Certificate 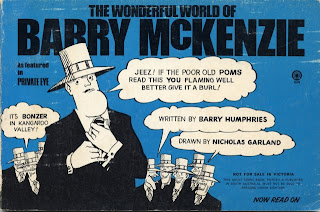 The Australian film industry in the Seventies was like Janus, the two headed Hell Hound emerging out of the barren, Menzies-stained cultural wastleland. One shiny, perfectly manicured head was called Art - everyone said they loved Art, forever patting his head and saying "What a good boy. Have another bowl of Chabilis." The second head was called Artless, who smelt like damp carpet and was forever licking his balls in public. Yet despite his appalling lack of social grace, you can't help but fall in love with Artless. It just takes a while to get his unique fragrance out of the cushions.

Quentin Tarantino loves Artless too. During his 2003 publicity tour for Kill Bill, his love letter to Seventies kung fu movies, Quentin raved to blank-faced Australian journalists about his favourite Aussie filmmaker Brian Trenchard-Smith. Blank. The director of The Man From Hong Kong? Still blank. "But he's made a lot of films..."

In Not Quite Hollywood, Tarantino is finally given the floor to enthuse at length on what he coins "Ozploitation", a cathartic squall of cinematic excesses reflecting the drive-in explosion in America from a few years before. For a good decade following the early Seventies our screens saw sex and blood, druggery and thuggery, kung fu kicks, music, more sex and vicarious thrills nestling uncomfortably next to pinafores and period prattling. For every Hanging Rock there was a Hanging Cock, and during that brief, seemingly forgotten and arguably Golden Age we were a miniature colonial outpost version of B-king Roger Corman's genre sausage factory , until the demise of the drive ins and rise of home video changed the B film market worldwide.

And good riddance, some would say. For those fascist aesthetes who pass judgment on a film's cultural importance with bourgeois buzzwords like "significant" and "profound", Ozploitation is the steady drip that won't go away. Gleefully un-PC and revelling in their own shock tactics and gratuitous, cartoonish nudity and violence, the most despised of all genres - sex, horror, action, biker and kung fu movies - were also among the top-grossing Australian films of the decade. One could argue sex films helped bankroll a bona fide film industry:

Tim Burstall's success of fourwalling his first commercial feature Stork in 1971 led Roadshow to bankroll Burstall's Hexagon Productions and Alvin Purple (1971), the first homegrown sex comedy under the new R certificate, and the first legitimate hit for the emerging "New Australian Cinema". It's like the Mafia underwriting cheques for the Kennedy campaigns, but with less gunfire. And yet the debt to Alvin Purple is hardly mentioned, and never in polite company. In a country which canonizes its pioneers, cinema strangely pays little heed to its own trailblazers.

Only a few years before, it was considered a joke to call yourself an Australian filmmaker. The Lucky Ones could make a fortune in advertising rather than slave in our version of Poverty Row making formulaic product for television's unblinking Third Eye. Suddenly it seemed most of us woke up from our sanitized Anglophile daydream: to the naked ear there was an instant audience more than willing to pay to hear Sailor Talk with an "Orstraylian" accent. Then there was (is?) our primordial fixation on SMUT. Senator Don Chipp's aggressive campaign to introduce the R Certificate coincided with the tide of cultural and sexual liberation washing over the dry continent, and within a year the brittle, oppressive wowserism of the Menzies-era thought police was becoming a glaring anachronism. Which is not to say it atrophied and blew away. Richard Franklin's filmmaking career was almost crushed by a well-orchestrated campaign by the Festival of Light objecting to his R-rated yet thoroughly innocuous comedy The True Story Of Eskimo Nell (1975), and he resorted to a nom-de-plume for his second, more salacious offering Fantasm (1976). 's producer Anthony Ginnane was to become a pariah himself amongst the cultural elite, whose oddly parochial protectionist attitudes towards importing actors or exporting Australian films overseas were in stark contast with Ginnane's foaming-at-the-mouth internationist approach. To this day, Ginnane's ability to second-guess audience trends and to sell his "despicable" genre films to the world makes him one of the country's most victorious Sleazy Riders. 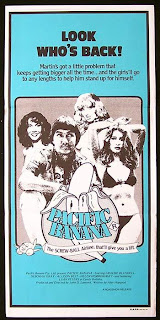 Predictably, too much of a good thing left Aussie audiences bloated and jaded, and looking for new thrills. Between ... and its 1974 sequel Alvin Rides Again, the public's fascination for seeing sex on screen faded, only to be replaced by action and horror. Exit Alvin and Petersen; enter Stone, Mad Max, and a slew of cheap-and-nasties inspired by the success of cheap, nasty horror hits from overseas. Genre movies followed the Corman model, reflecting the simple carnal desires of their drive-in demographic: there were car films (High Rolling, FJ Holden, Oz) and biker films (Stone, Cosy Cool, Mad Max), all with blaring Oz Rock soundtracks. Some films even straddled the arbitrary divide between art and exploitation (the brilliant Hitchcock-inspired Long Weekend, for example) and, not surprisingly, do it with style and chutzpah. A few filmmakers like Burstall and Franklin were able to able to scale the walls out of the Exploitation Ghetto, but only just. On the other side of the wall, there existed master showmen with no pretenses towards making "art" - John D. Lamond, Australia's own Russ Meyer, had earlier devised the ad campaigns for Roadshow's controversial hits like A Clockwork Orange and Emmanuelle, then used his canny ballyhoo skills for his own nefarious ends: Felicity, Australia After Dark, The ABC Of Love And Sex Australia Style...

And yet, even at their most repellent and exploitative, Australian B-films are well-crafted, belying their pitifully low budgets, and have an exceedingly liberal dose of self-awareness that's irresistible. Remember Janus the two headed Wonder Dog? It's still the same creature; the two heads are merely that arbitrary divide between Art and Artless, and ultimately are both needed for the creature to exist. Please keep this in mind when the Artless part is dry humping your leg and his breath smells like the death of fun itself. 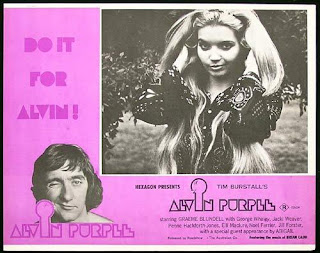 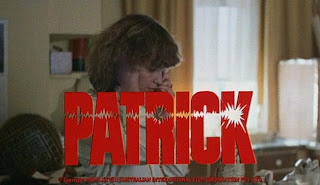 's response to the ESP horrors of Carrie and The Fury has a glass-eyed patient, shocked into a coma by the death of his mother, unleashing a Pandora's Box of destruction from his hospital bed. A sympathetic nurse and Patrick's doctor (Sir Robert Helpmann) uncover Patrick's traumatic past, and suspect there's an endless well of evil behind the vacant stare. Australian horror's first international breakthrough is a suprisingly effective and highly stylized exercise in tension, due to to Richard Franklin's sure hand and a layered script by Everett de Roche.

The Man From Hong Kong 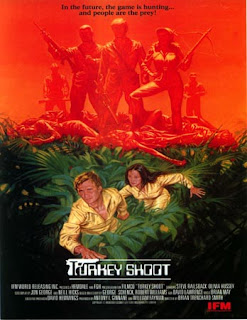 Purist, trashy, joyously exploitative drive-in fodder set in a "futuristic" jungle prison where detainees slated for brainwashing are subjected to endless all-girl showers and torture sequences, then forced to participate in a deadly man-hunt in the jungle. Trenchard-Smith's hyper-ludicrous hybrid of The Big Doll House, 1984 and The Most Dangerous Game was blasted by critics as the lowpoint of Australian cinema to date. Which is true, and proudly so; only now can its bleak, jet-black humour, prolific gore and imaginative genre-splicing place this disreputable chancre of a film as a true classic of Australian B cinema. 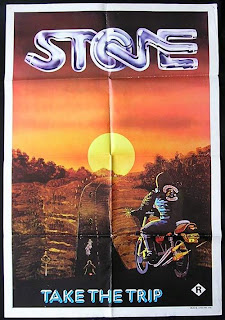 One-shot auteur Sandy Harbutt wrote, directed and starred in Aussie bikerdom's uncompromising counter culture classic. An idealistic young cop dons the denims of biker gang the Gravediggers to uncover a serial killer in their midst; as Stone descends deeper into their culture he finds, between the knife fights, skinny-dipping and psychedelics, the meaning of the term Honour Among Thieves. Harbutt's sympathies clearly lie with the outlaws, a stance at odds with the biker genre's usual conservatism and faux morality. Stripped of Mad Max's futurist trappings, Stone thus stands alone as a compelling, not to mention career-killing mix of kitsch and conviction.

The Adventures Of Barry McKenzie (1972)

Bruce Beresford's technically rough, hilarious bad-taste ode to the wide-eyed and obnoxious Fosters-soaked Aussie abroad rips Barry Humphries' character from the pages of Private Eye and brings him to life in all his technicolour triumph, as he tears a swathe through English politeness along with his pre-Dame Auntie Edna (Humphries again, in one of three roles). As Bazza, Barry Crocker - yes, THE Barry Crocker - has the big chin, the potty mouth and glaring anachronistic "Strine" lingo, and the blissful lack of self-awareness that nail the script's satiric swipes at all and sundry. With cameos from Spike Milligan, Peter Cook, and various other "pommie bastards". 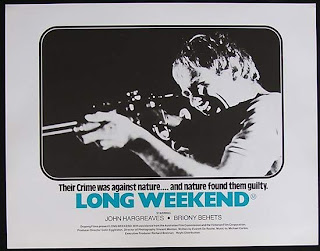 Nature turns nasty in an underrated and, until recently, forgotten masterpiece of terror. Everett de Roche's remarkable two-character script pits a self-absorbed and relentlessly bickering city couple on a relationship-repairing beach retreat against an increasingly hostile, almost supernatural environment: birds swoop, the usually docile kangaroos slash and claw, and the reappearance of a dugong shot by Hardgreaves as target practice is harbinger of a fate which, to de Roche's credit, is never explained. Dark, suspenseful, ambiguous, and utterly enthralling, and hardly suprisingly, is due for a remake. 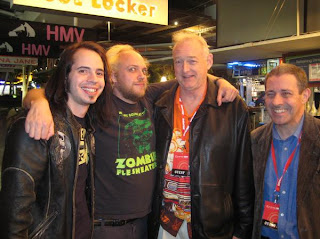 In conjunction with our retrospective focus, this panel will explore the history of Australian genre cinema and the industrial conditions which led to cult classics like Alvin Purple, Patrick and Turkey Shoot making it to the big screen.